Boys and girls varsity track and field placed second against seven other schools on Tuesday, April 26 and Thursday, April 28. 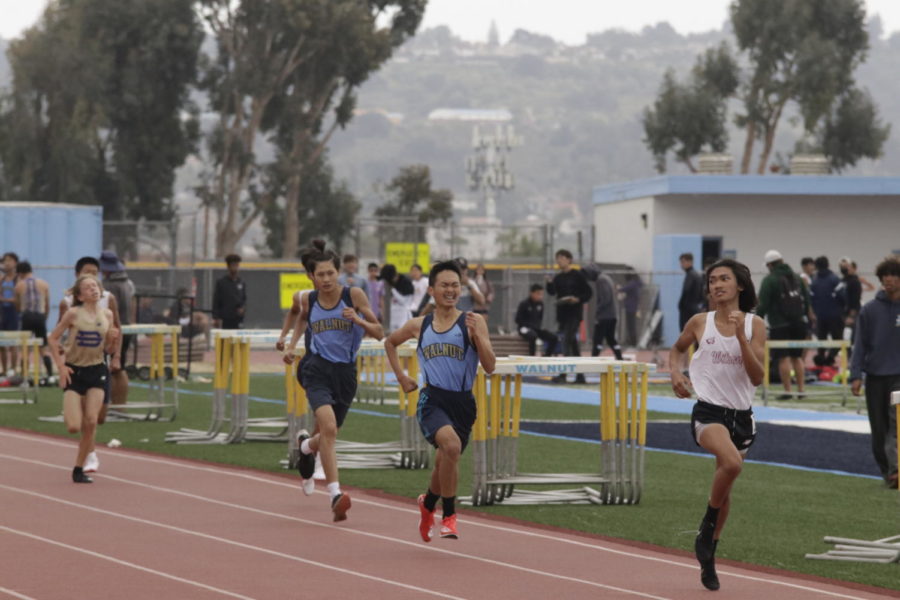 The final push | Varsity track and field runners Troy Nguyen (left) and Xiaoran Wang (right) compete with each other in the 1600-meter run, both placing in the top five. “I went all out because I knew it was my last race,” Nguyen said. “I had the motivation to do the best I [could]. I got what I wanted. It’s a good feeling and it’s why I run.”

Varsity and frosh/soph boys and girls track and field competed at league prelims and finals at WHS, Tuesday, April 26, and Thursday, April 28.

Overall in the Hacienda League, Walnut placed second. Individual placing in the prelims and finals determine who will compete at the upcoming California Interscholastic Federation (CIF) championships Saturday, May 7.

“I think I did pretty well considering I hit a new personal record,” Nguyen said. “I like pole vaulting as a sport, but also I like the process of getting better and seeing it happen in front of me.”

“I think I did alright. I got my personal record,” Wang said. “I want to compete because the people around me are all really nice people and I love them.”

During finals, junior Evan Johnson placed first in the varsity boys pole vault with a height of 11-00.00 and third in varsity boys long jump with a distance of 19-00.75.

“I’m happy to place, but I’m even more happy when I jump well,” Johnson said. “I don’t think I jumped that well.  it’s not really about the place I get or which thing I win, it’s more about my own personal growth.”

“I did okay, but I definitely think I could’ve done better,” Sino-Cruz said. “I still like competing because of the friendly competition around me. I really like how competitive the schools are, and how we can still be friends within the competition.”

After halting during the COVID-19 pandemic, the track and field team resumed practices to prepare for the Hacienda League prelims and finals. Track and field prepared for six weeks in total for conditioning, and from there after, coaches focused on training athletes for tbeir respective events.

“I am really proud of our team this year and everything that we did, especially coming out of a COVID-19 year,” track and field coach Keith Thompson said.  “This was probably one of my favorite years of coaching and I think everyone gave it their best this year.  I also really enjoy hosting the Hacienda League prelims and finals. Though we got second place and that wasn’t what we wanted, I’m really excited for the future of this group of kids.”